SALTA, Argentina, Sept 14 (Reuters) – In Argentina’s remote northern Salta province, the silence of the desert landscape is broken only by the hum of machinery pumping salt-water brine to extract lithium, a sign of accelerating efforts to ride the global electric vehicle boom.

Beneath the South American country’s highland salt flats, reached by winding mountain roads, is buried the world’s third largest reserve of the ultra-light battery metal, which has seen a price spike over the past year on the back of a global push towards greener modes of transport.

Provinces like Salta are building regional mining logistics nodes and access roads, lowering tax rates and rationalizing confusing rules for the sector to attract investment in the ‘white gold’ metal.

That has seen a flurry of new activity, deals and plans to ramp up production, which could make Argentina a key player in the electric vehicle supply chain in coming years, with demand from carmakers and buyers like China expected to gain pace.

“Argentina could become the world’s leading producer from brines in less than a decade if the flow of projects is followed and maintained,” David Guerrero Alvarado, a consultant advising Canada’s Alpha Lithium (ALLI.V), told Reuters in Salta.

Alpha Lithium is in the investigation stage for a project in the nearby Salar Tolillar, one of many early-stage developments that – while offering promise – need an often long and costly process to be turned into a reality.

With countries around the world scrambling to reduce emissions, rising global lithium demand and surging prices have drawn increased interest in the so-called ‘lithium triangle’ that spans parts of Argentina, Bolivia and Chile.

In Argentina, mining provinces such as Salta, Jujuy and Catamarca have moved to encourage wary investors, signing an agreement in June to create uniform rules and to “strengthen infrastructure, legal security and fiscal stability.”

Salta’s Secretary of Mining and Energy, Flavia Royon, told Reuters the province could produce 200,000 tonnes of lithium carbonate equivalent annually by 2025, after flicking though a list of upcoming lithium developments.

That would be a huge ramp-up, equivalent to around one-fifth of forecast global production that year.

“There’s interest in Salta and it’s the Argentine province with the most lithium projects in the pipeline,” she said.

The country’s CAEM mining chamber predicts a lower 175,000 tonnes nationally by 2025 from an estimated 38,800 tonnes this year. But – with lithium projects often taking years to ramp up – that remains a lofty goal.

FUELS OF THE FUTURE

Argentina’s center-left government has been making a conscious and strategic push towards lithium.

Argentina’s center-left government has been making a conscious and strategic push towards lithium.

Last year it lowered taxes on all mining exports to 8% from 12% and in April eased capital controls on firms taking foreign currency out of the country for projects with investments of over $100 million. It has backed the state energy firm YPF (YPFD.BA) to create a lithium battery plant and is pushing a bill to lower taxes on electric cars.

“We will focus on areas and fuels of the future, that generate zero polluting emissions, which are basically hydrogen and lithium batteries,” Production Minister Matias Kulfas said in a recent meeting with reporters in Buenos Aires.

A source at the central bank, which is keen to rebuild battered foreign currency reserves, said that the country had seen growing investor interest in mining, including in lithium.

Australia’s Orocobre Ltd (ORE.AX) and U.S. miner Livent Corp (LTHM.N), which have supply tie-ups with Toyota Corp (7203.T) and BMW (BMWG.DE)respectively, operate the two producing lithium projects in Argentina out of a total of over 60 proposed projects in various stages of development.

China’s Ganfeng Lithium Co Ltd (002460.SZ) is in a bidding war to buy Argentina-focused Millennial Lithium Corp (ML.V) after an unnamed battery maker made a rival bid to its $280 million offer.

Ganfeng and Lithium Americas (LAC.TO) are aiming to produce some 40,000 tonnes of lithium carbonate equivalent from the Cauchari-Olaroz mine, with production set to start in 2022. 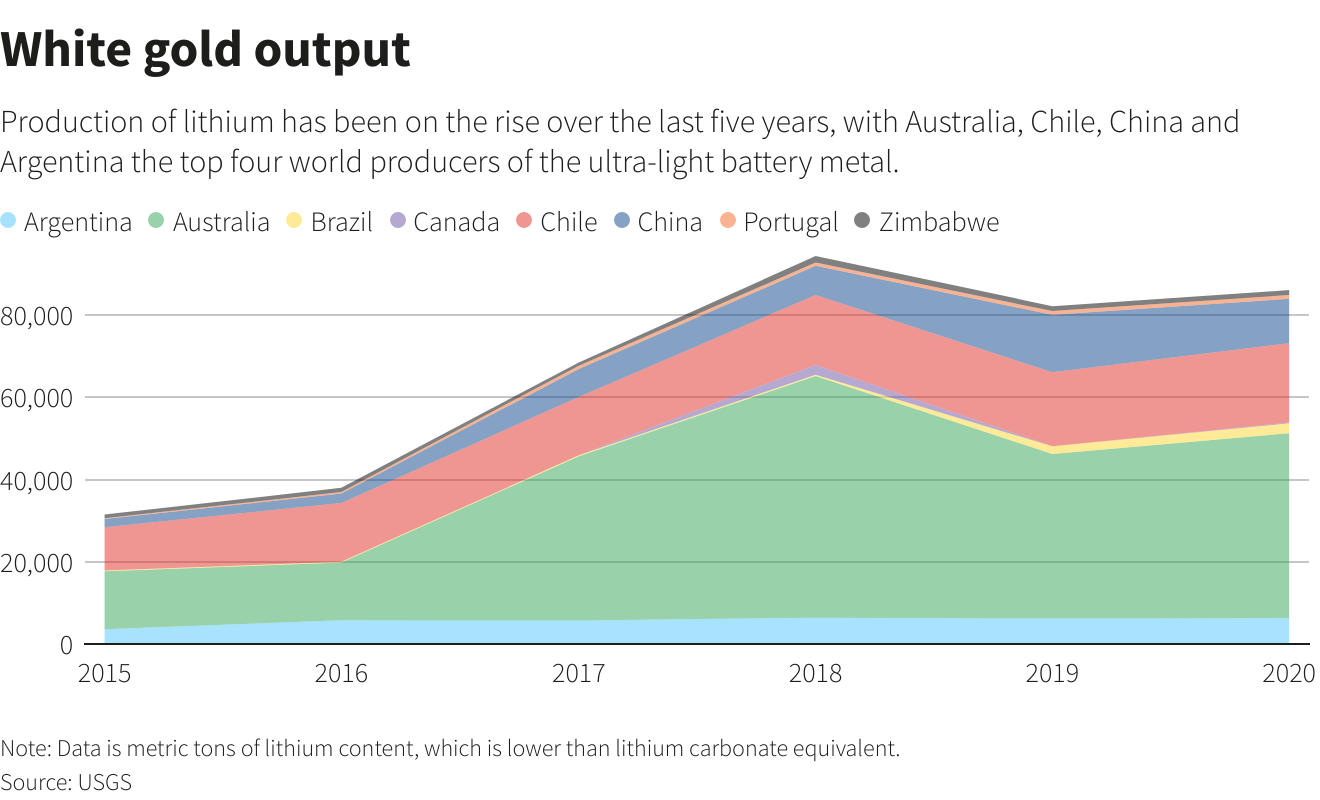 Doubts, however, remain about whether Argentina can rev up its lithium output in the way it has promised. Half a decade ago, under a business-friendly government, the country expressed ambitions to overtake larger producer Chile but failed to do so.

“Argentina has the resources, but in order to transform them into reserves and making projects… a series of clear and stable rules is needed,” said Buenos Aires-based Natacha Izquierdo, an analyst at consultancy Abeceb.

Alejandro Moro, general manager of Rincon Lithium, an Australian firm that owns a concession on the Rincon salt flats in Salta, agreed there remained hurdles to attracting capital.

“This a country with a quite unstable macroeconomy, with a high degree of taxes that are imposed on the capital that comes to invest,” he said.

The firm is running a pilot plant on the flats, almost 4,000 meters (13,100 ft) above sea level. It pumps brine through pipes 30 meters below the ground, which is then refined to produce lithium carbonate. Rincon hopes to extract 50,000 tonnes a year by 2025.

Despite his reservations, however, Moro said he had become more optimistic about Argentina’s support for mining investments after meeting with senior officials a few weeks earlier.

Argentina, an agricultural powerhouse with abundant oilseeds, has for years focused energy subsidies on biofuels, but officials are now signaling a shift in priorities towards electric vehicles – and lithium. 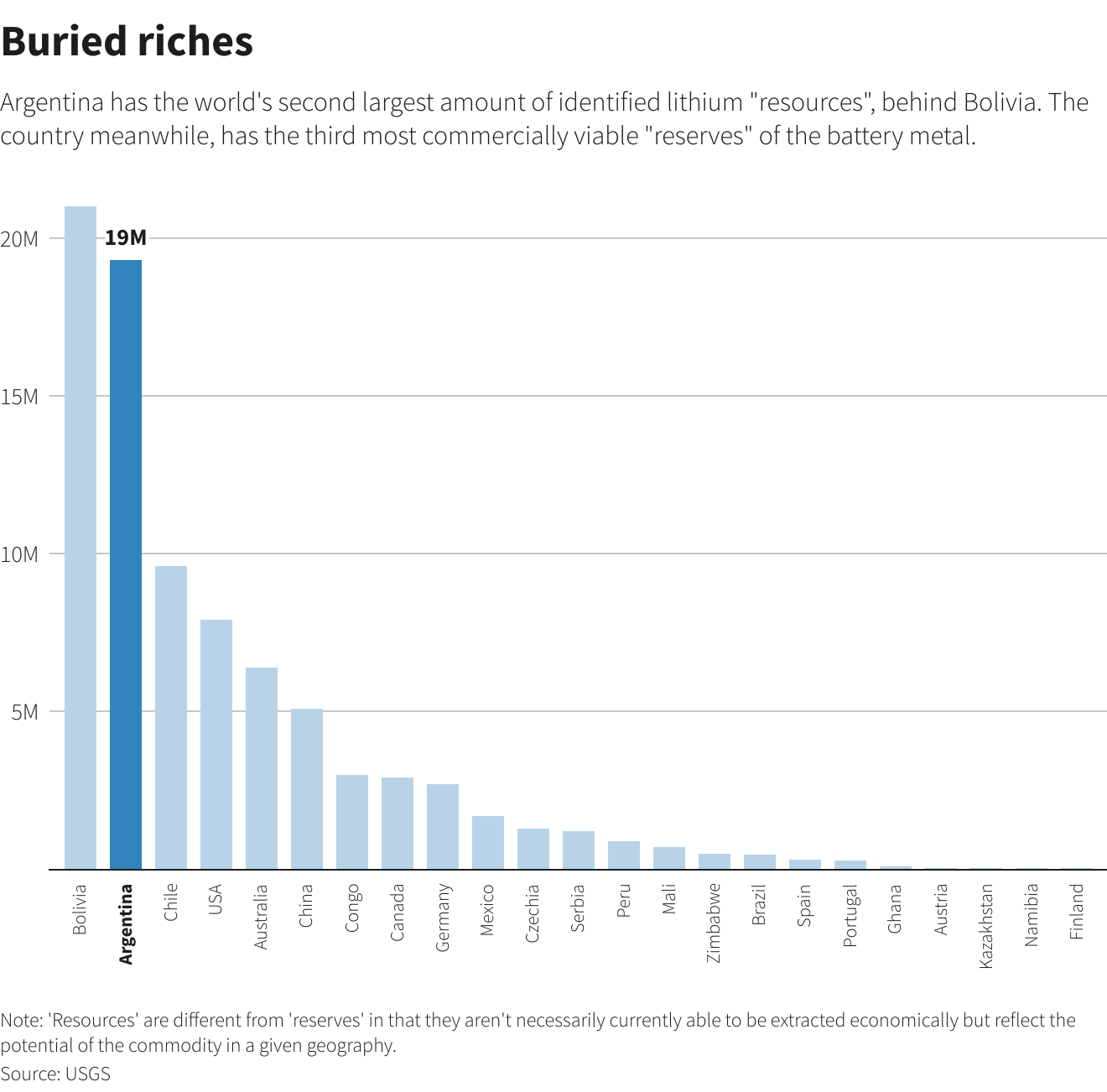 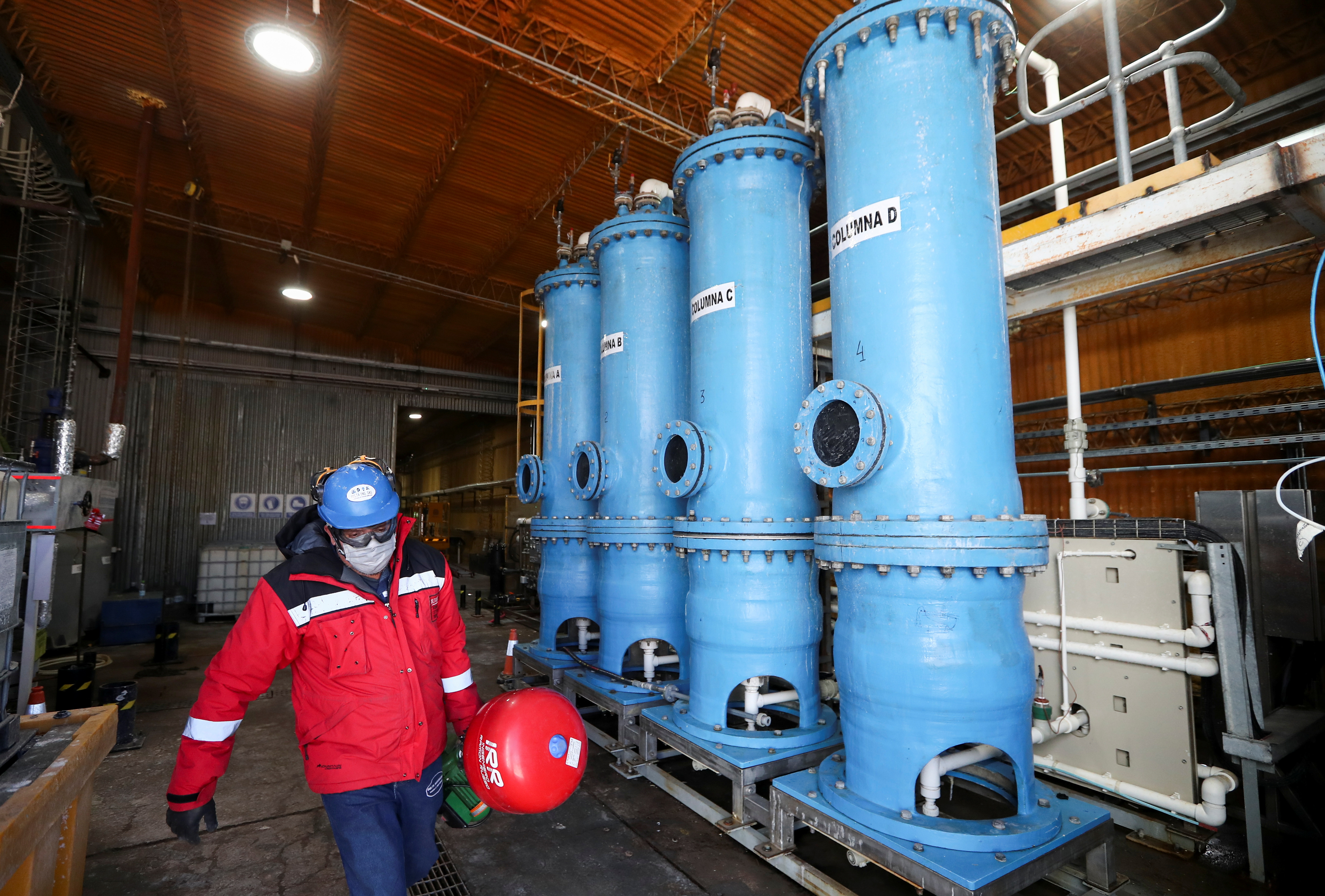 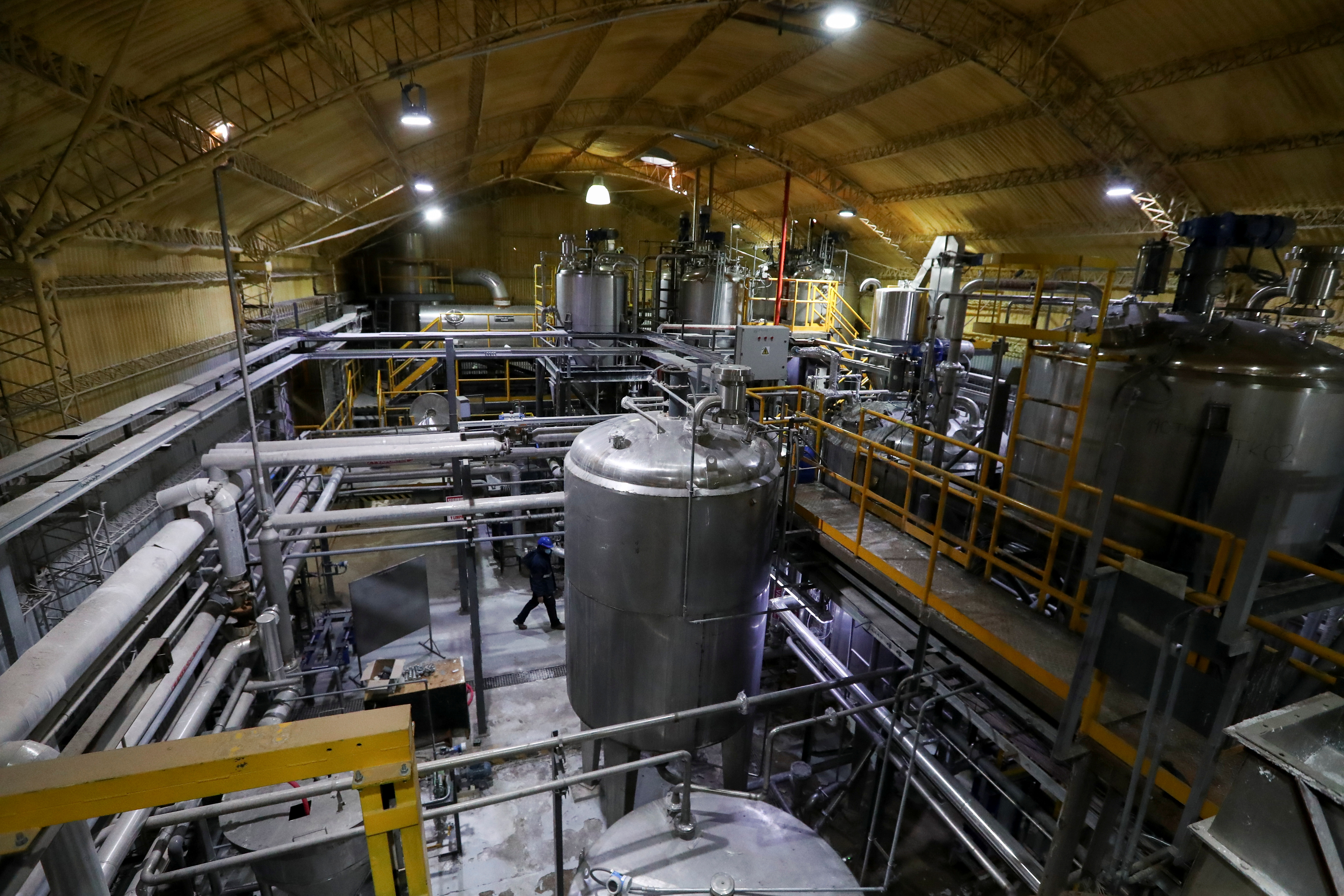 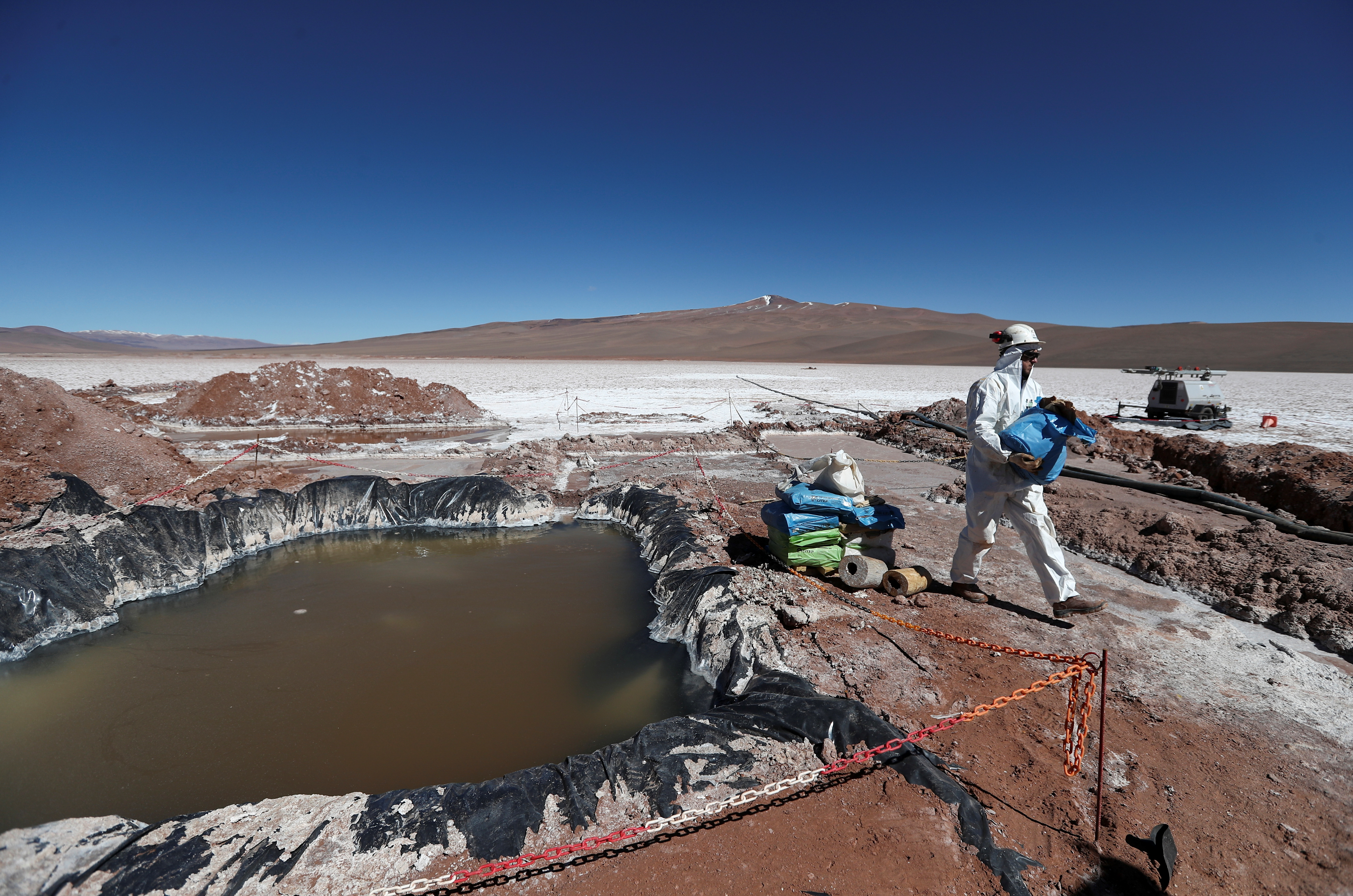 An Alpha lithium employee works next to a brine pool at the Tolillar salt flat, in Salta, Argentina August 13, 2021. REUTERS/Agustin Marcarian 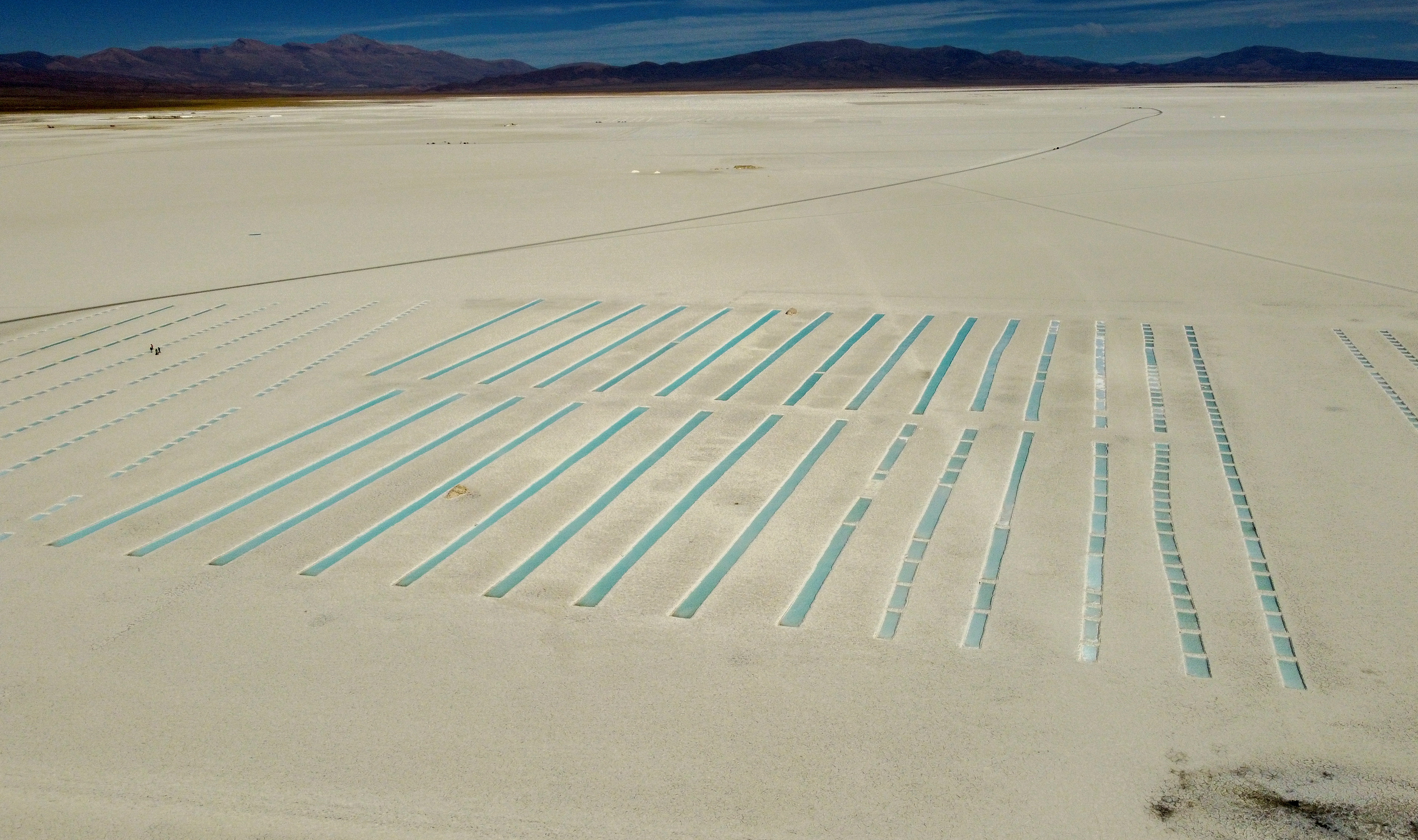 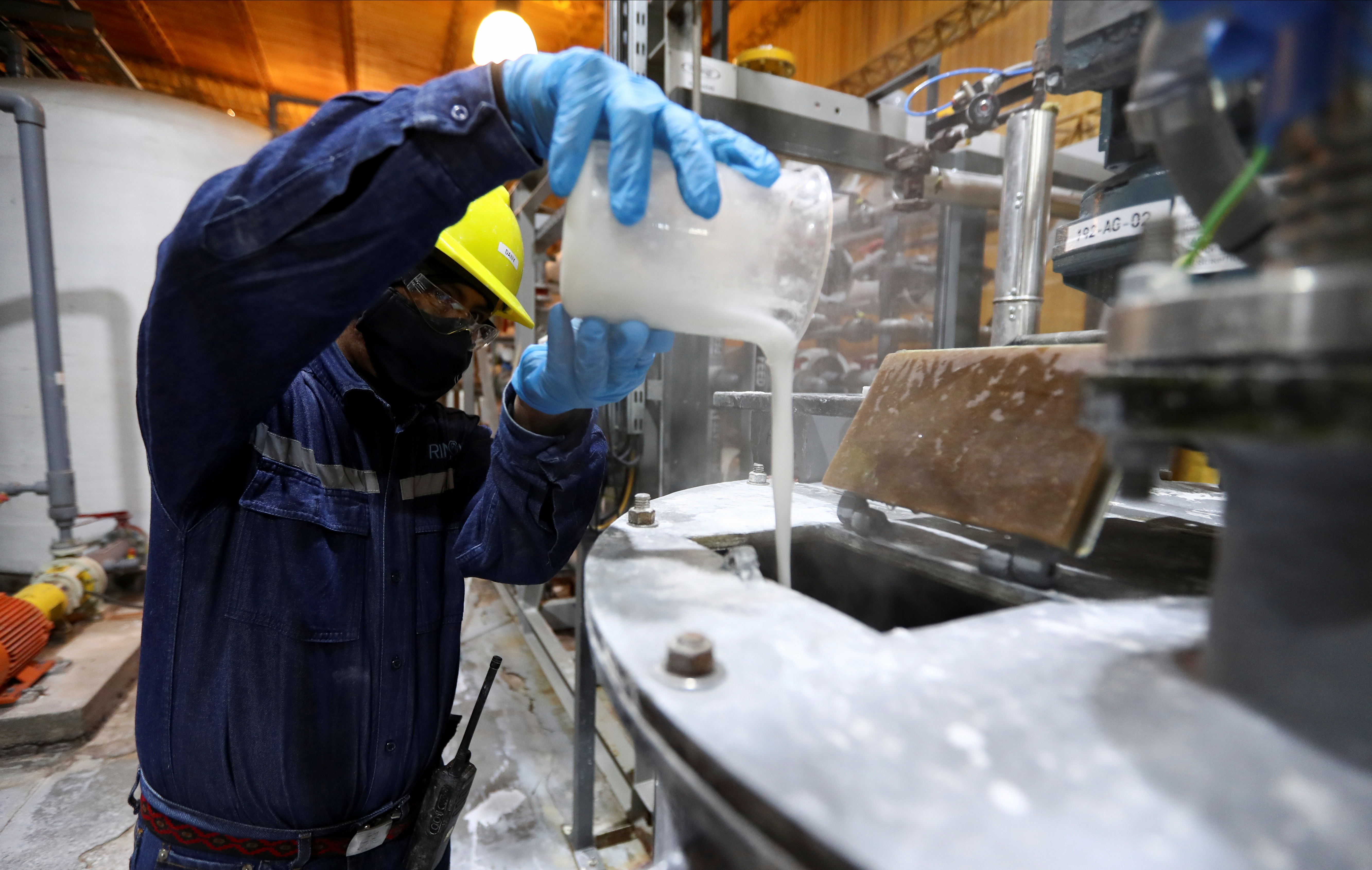 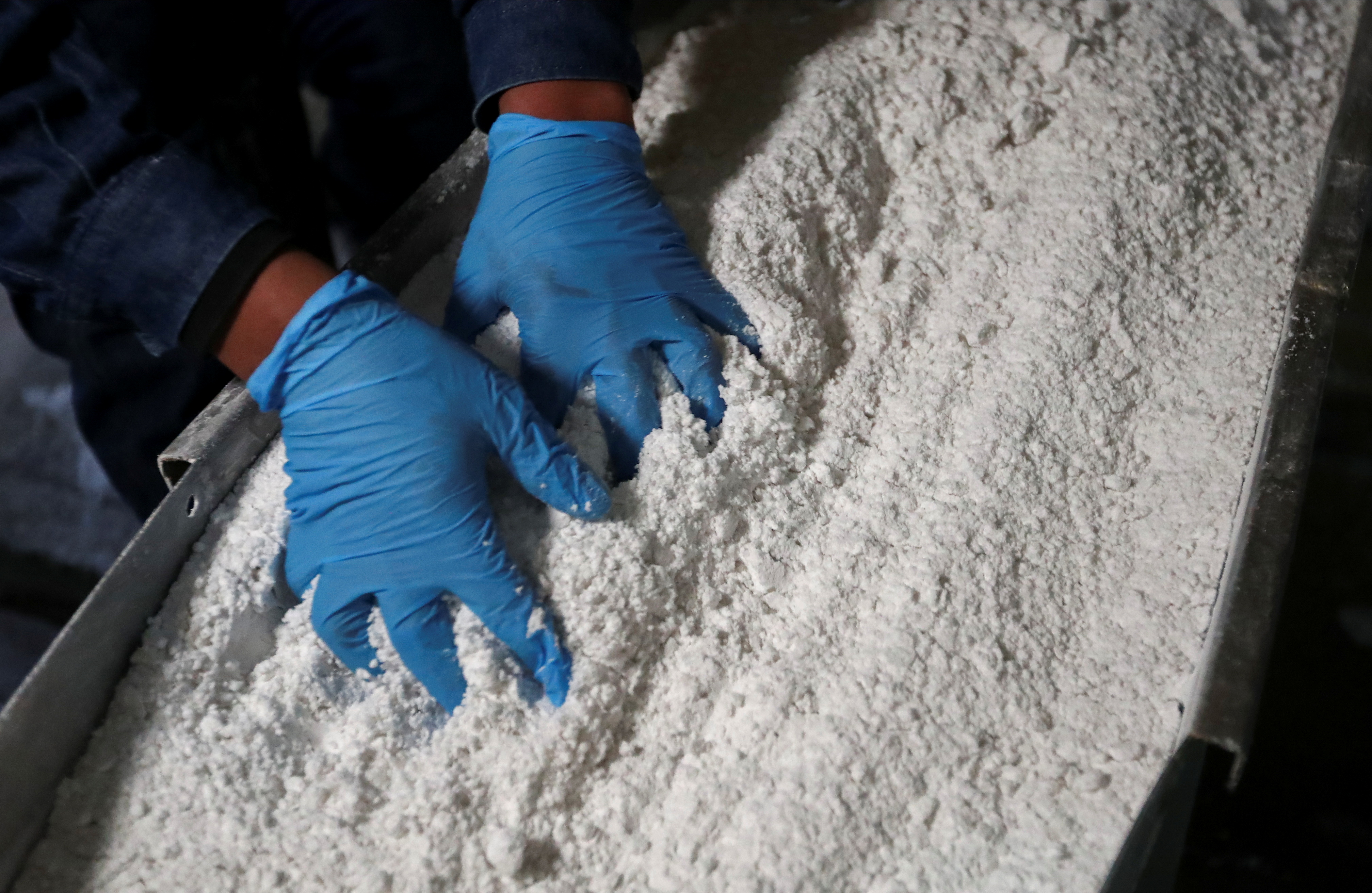